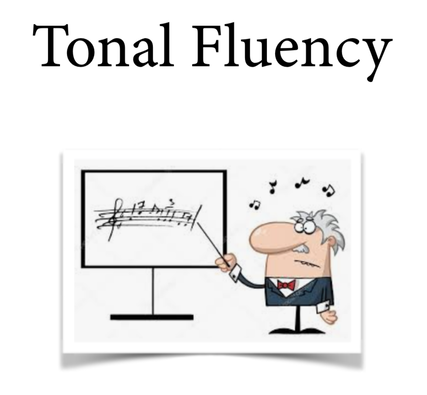 Tonal Fluency is a groundbreaking approach that goes beyond merely teaching scales, but teaches tonality and what it actually means to be playing in one key or another. As teachers, we understand the connection between scales and tonality, but the vast majority of our students do not. To them, the key signature simply tells you which notes are automatically sharp or flat, and that the melody will often start or end on the pitch that names the scale. But that's about the extent of it. Before you get defensive and tell me I'm wrong (I'm not) hear me out...

My journey with this project began about ten years ago when I had challenged myself with the goal of having 100% of my 8th grade band students be able to perform all twelve major scales with 100% accuracy by the end of the year. I believed that was an admirable goal and that by achieving it, my students would be in great shape heading into high school. The high school director (who is a legend in music education and whose approval I so desperately craved) would be so thrilled and would think I was a great teacher. Word would spread throughout the kingdom and parades would be held in my honor. So we began working diligently everyday, starting with 5-note scales, then once those were mastered, moving on to the full scales. Instead of just focusing on one scale at a time, like many other teachers were doing, I was having them play all of the scales everyday. We were on fire! Sure enough, when springtime came around, nearly every student in the class could accurately play all twelve major scales and I was the greatest teacher in the world. But there was one problem...I wasn't.

Although nearly all of my students could accurately perform all twelve major scales, even in thirds, they had no idea what they were doing. Sure, they could play an F# Major scale, but if I gave them an exercise (or a piece) in Concert C Major, they would fall on their faces. I would look at them in shock and say "Guys! Come on! We play this scale everyday. This is one of the easy ones. Let's play the scale together," and we'd play the scale together, then try the exercise again and it would be a little better, but not much. It was almost as if they weren't making the connection between playing the scale and playing the music. Then it hit me...THEY WEREN'T! They had memorized the finger patterns and could play each scale, but they didn't get what it meant to be in a particular key...there was no connection to real music. It's as if I had asked them memorize the alphabet in Spanish, then expected them to become fluent native Spanish speakers. They could say all the letters of the alphabet and probably even a few words, but that's not the same as being able to speak and understand the language. Being in D major just meant having F# and C# in the key signature. Even though we talk about "home base" and the "tonic" and everything, most students don't "get" the concept nearly as well as we think they do.

I obsessed over this disconnect between theory and application for hours on end, and came up with several different game plans on how to attack this problem. At the time, I was teaching about fifteen private lesson students and I decided to use them as guinea pigs in my experiments in tonality education. I went through many, MANY different versions and revisions of my plan, each time making an adjustment here or there. Now, after years of constant tweaking and adjusting, and even after taking a few years off from teaching completely (which actually helped me become a better teacher) I'm back at it and have brought my system back into the classroom again this year and it has been wildly successful. With some urging from my incredible colleagues, I have decided to compile these resources into one packet, organized intelligently and progressively, and make them available to the rest of the world.

Here's the system. Instead of learning scales and scale patterns, we begin with simple melodies. Melodies that contain only the first three notes of the scale. We play those melodies in six different keys. Concert C, F, B-flat, E-flat, A-flat, and D-flat. That's all they need for now. But from the very beginning, we play all six keys everyday. Here's a screenshot the first exercise for alto sax, just as an example. 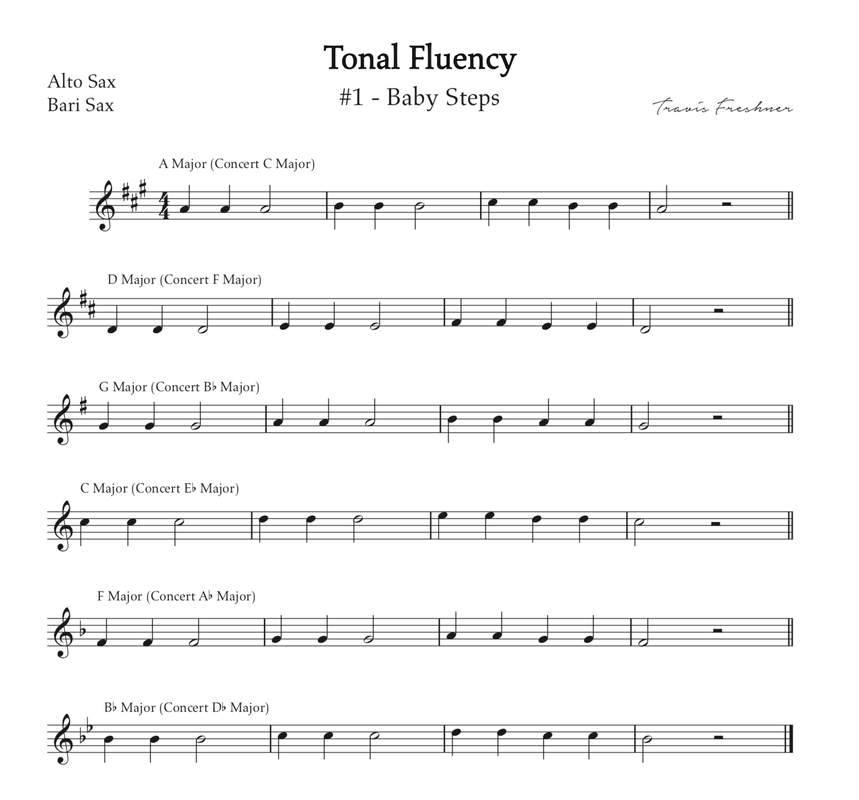 I begin these with my 7th graders, who are in their 2nd year of band. You might have to teach a new note or two on this first one, but guess what...you were going to be teaching that note to them sometime soon anyway; might as well get it out there now. Each new exercise builds off the previous one, but we progress very gradually. These first ones are very easy....that's good; they are supposed to be easy. This is not supposed to be a technical challenge (yet). We are laying the foundation for what is coming later...teaching concepts and using musical examples they can understand without having to think too much about technique. Exercise #2 still only has the first three notes of the scale, but they are in a different pattern. The majority of the exercises in the book are simple folk songs that they know from beginning band. In fact, here's the first six... 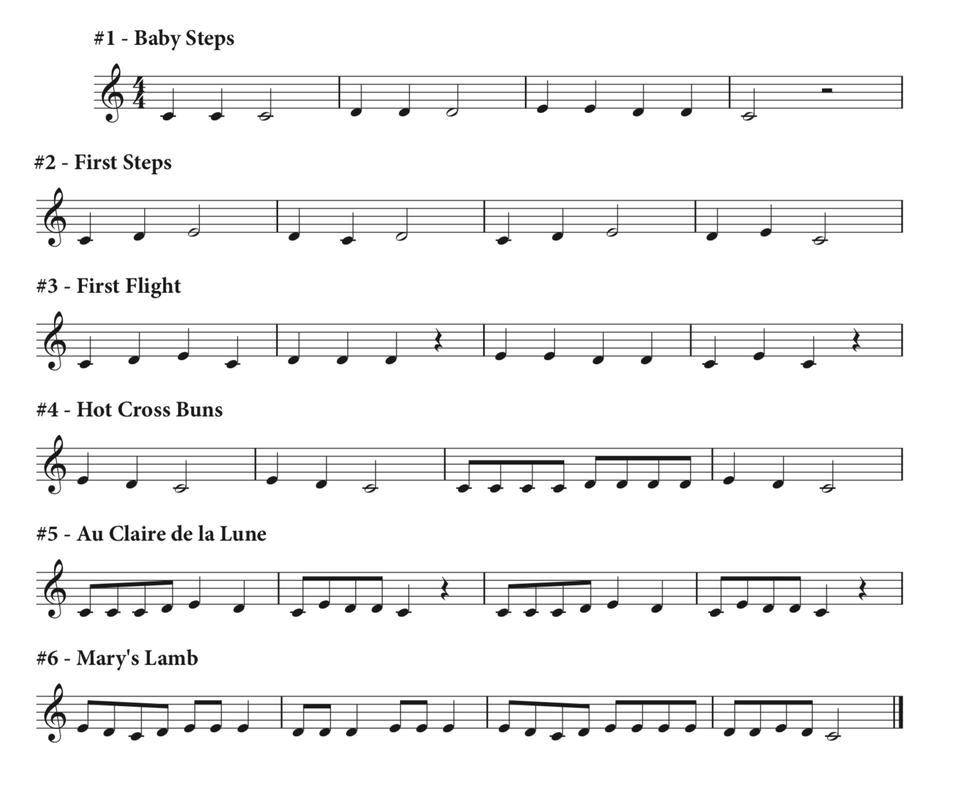 ...but they are each played in all six keys every day. The students are not playing by ear (although that is a good exercise as well, but does not transfer well into the large ensemble rehearsal), but each exercise is written out in each key (like the alto sax example shown above).

The first six exercises use only the first three degrees of the scale (do-re-mi). The next five exercises use the first four degrees (do-re-mi-fa). Then five, then six, then seven, and we finish with a series of melodies that encompass an entire octave. Yes, the major scales themselves are included as one of the exercises (#35), but they are not the final exercise. I intentionally placed the scales at the beginning of the section of full-octave melodies to reinforce that the scales are not the end goal, but merely the system and structure behind the approach. The students will learn their scales, yes, but more importantly will fully grasp the concept of tonality and what it means for a piece to be in a particular key. As a result, they will have FAR greater understanding of music and their level of performance will skyrocket.

I have had tremendous success using this system and I am now offering it to you, my friends. This is my secret weapon...please use it wisely.

Play one exercise per day in all 6 keys. It takes less than 2 minutes of rehearsal time and your band's technique and tonal understanding will go through the roof!